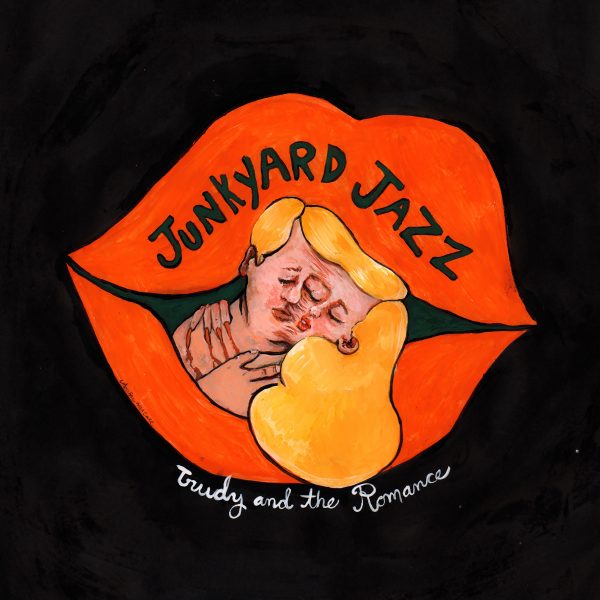 All releases from Trudy and the Romance

Too proud to hide. Too good to lose…

Somewhere among the daydreamers and heartbreakers, beauty queens and jock teens, Trudy and the Romance are ready to lure you into their suitably skewed and riotously upbeat rock’n’roll world. Wielding rhythmic melodies, a carnival of characters and a wildly astute, cartoon-like perspective the trio’s ‘Mutant 50s Pop’ will make – and break – even the stoniest of hearts.

With whip-smart imagination and tongues firmly lodged in cheeks, Trudy and the Romance are nowhere boys for the 21st century. Born of a bygone era; the days when sharply-suited Teds strolled the streets and a sea-breeze would fail to fuck the flicks of a head well-oiled, Trudy take the good-hearted ramshackles off Jonathan Richman, punch out The Four Freshmen’s surf harmonies and scruff them up through the raw audacity of the noughties whilst tightrope-dancing somewhere between reality and fantasy. “We’re real-meets-cartoon… kind of tacky but great, y’know, it’s trashy,” Trudy’s singer and guitarist, Olly, explains. “It’s a bit like Ralph Bakshi’s Cool World, Who Framed Roger Rabbit, Mary Poppins or Space Jam. That’s why we call it Mutant 50s pop… the more cartoon we get, the better. It’s a little heart-warming and gently creeps up on you. It’s not tugging but just kind-of-there; Alligator Rock’n’roll!”

Sucking you in to their silver screen dreams, and friends since their school days in Chesterfield, Olly and Trudy drummer, Brad have always shared an intuitive knack for rhythm and melody. Whilst studying in Liverpool, Brad would travel to play alongside his pal and bassist, Lew for the band’s first residency shows in Leeds’ “dingy and dirty” pub The Fenton and fast times at The Brudenell Social Club supporting Ariel Pink. Before long Trudy’s gauzy guitar songs commandeered attention. Following radio spins by BBC Radio 1’s Huw Stephens and BBC 6music’s Steve Lamacq (as Featured Artist Of The Week), recording sessions with Bill Ryder Jones and Spring King’s Tarek Musa ensued. The trio released a 7” via US tastemaker label B3SCI, performed packed-out shows at both ends of the country for The Great Escape and Liverpool Sound City, then found their way into DIY’s Class of 2017 and NME’s ‘100 for 2017.’

Bringing truth to the age-old proverb that one piece of junk is another man’s treasure, the band’s Junkyard Jazz EP – recorded in former vicarage, Stockport’s Eve studios with producer, David Pye – takes its title from another genre they use to describe their seemingly hotchpotch influences. “Our stuff’s like a collage and we’re trying to jigsaw it all together,” explains Olly. “The songs on the EP are meant to be loose but compact. It ties together as a bunch of different little stories; Junkyard Jazz, a messy love.” ‘Junkyard Cat’ refers to Olly and Lew’s time as stray alley-cats kipping on Brad’s settee and hints at Hanna-Barbera’s 60s TV show Top Cat, whilst ‘Ruff Ryder’ was written by Lew about himself… as a potential homewrecker.

Always off-kilter but brimming with uplifting spirit and Beatles-esque positivity, it’s a sign of what’s to expect from Trudy’s debut album. It will be a sophisticated leap, which Olly says, digs even deeper into dreams and nightmares and will certainly be colourful. “It’s so theatrical it makes sense,” tells Olly, drawing a comparison to twisted toons warped illustrator Ralph Bakshi. “The songs follow Little Johnny and his love for his high school sweetheart who disappears. He performs with his band, The Original Doo-Wop Spacemen and must get from the blue world to the new world. It’s about conquering the Sandman who forever taunts him with the mutated memory of a Sandgirl.”

To call Trudy escapism would be too easy. As with any great pop music, location falls into irrelevance. Whilst most bands dream of a world they can leave behind, Trudy is the sound of a band with their eyes-wide and keeping every option open. Eventually Brad wants a Beach house in the south of France – for now, Trudy are wholly satisfied building on the miles they’ve clocked up since the band’s incarnation in a Leeds ‘Spoons one Fish Friday, to rehearsing in their current Merseyside hangout they affectionately call ‘The Moons’…

“..Oliver Taylor, whose voice seamlessly transitions between a fragile falsetto and  guttural growls” – Consequence of Sound

“..This U.K. group may be newcomers to the rock scene, but they are already being hailed as the future of the genre.” NYLON

“Impossible to pin down, they deliver a drunken, stumbling, shambolic rock ’n roll that somehow keeps its shit together when the going gets tough. Truly, Trudy are something very special indeed” – DIY

“If anyone’s gonna do anything from Liverpool in the next 12 months, it’ll be this lot”– NME

“the most urgent they’ve sounded on record, and undoubtedly them at their most enthralling. Clearly not bereft of vigour nor ideas, you can only wonder with what they’ll come up with next” – The Line of Best Fit

“Sounding like a cross between Nick Cave and The Strokes… this track is an extraordinarily, upbeat” – The Independent