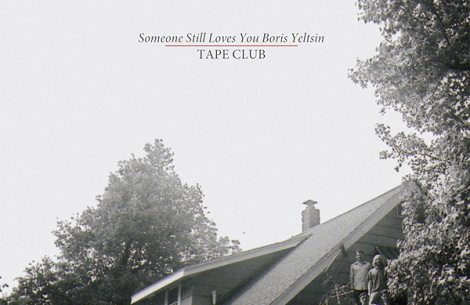 How many great songs does SSLYBY have to release before they become a regular part of that Best American Bands of The 2000’s conversation? Tape Club is a triumph. By deliberating staying away from their most popular tracks, Someone Still Loves You Boris Yeltsin has released a compilation equally representative of their talents, proving that their B and even C-sides are of great merit. The first half of the collection (through the Cobain meets bubblegum “Not Worth Fighting”) will be very familiar to fans of the group, mainly consisting of cuts from their first two pre-Broom EPs, Gwyn and Grace and Someone Still Loves You Michael Holt. “Let’s Get Tired” and “Song W & Song L” reside among their best work. “Lower The Gas Prices Howard Johnson”, an angsty yet innocent love song, could most easily have been inserted onto Broom. The Wilmington Demo of “Dead Right” is probably better than the original Pershing version on account of the warmer production and harmonies. “Cardinal Rules”, about the Springfield, MO minor league baseball team, and “We Can Win Missouri” explore the same issues of autochthony and personality of place as on “Yellow Missing Signs”. It would’ve been cool to see a live cut (they’ve been known to cover “Mr. Wendal”) or something from Daytrotter at least, but fortunately the collection has much of interest for even the most avid devotee. As for the SSLYBY neophyte, new bands will form on both sides of the Mississippi after listening to the 26 choice gems which comprise Tape Club. Contributed by Chris Gedos

Someone Still Loves You Boris Yeltsin