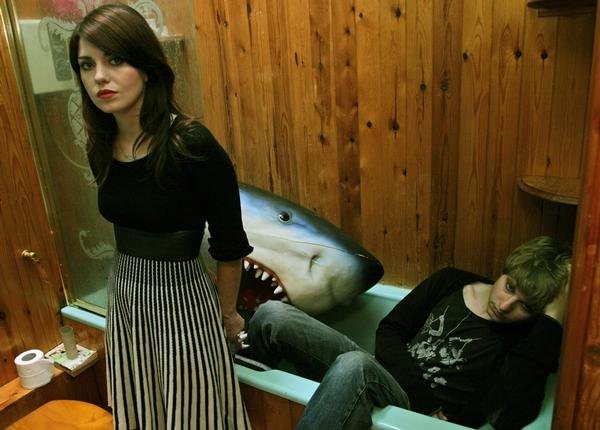 team b3science recently got together with Steven from Brighton, UK duo Blood Red Shoes while the band were in LA to talk about their new LP, Fire Like This, b-side philosophy, Fugazi, Scott Pilgrim vs. The World and more… check it out below:

b3sci: Fire Like This is a killer follow-up LP… how would you say Blood Red Shoes artistically evolved on your second album compared with your debut, Box of Secrets?

BRS: Yeah I think we’ve moved forward with it, especially melodically speaking. I think we write better “songs” than before. It’s not a radical jump, it’s just that we’re mining the same kind of sound but hammering out all the details. I’m much happier with the overall feel and atmosphere of this record, I think it has more depth and I certainly think it sounds more personal and honest. I think the biggest improvement we made was in the vocals really. Just forcing ourselves to sing a take that felt right and not hiding behind double tracks and overdubs as much. Our hope is that it feels more emotionally bare because of that.

b3sci: What sort of chemistry with producer Mike Crossey do you attribute to Blood Red Shoes’ sound in the studio?

BRS: Well for one thing Mike is a great engineer, and that’s an art rapidly getting lost in favour of a “let’s throw some mics up and get it into pro-tools as quick as possible and fix it after” kind of attitude. That’s something we respect and value a hell of a lot. Beyond that the biggest thing he brought to us was being hard on us about our singing! He really pushed us as vocalists and I think we absorbed that pressure, especially on the first album, and now we keep pushing ourselves to become better singers. Singing is by far the hardest, most personal, most human, most scary fucking instrument you can learn.

b3sci: Do you have any long-term visions of a specific type of album that you seek to create some day… in the near or distant future?

BRS: I don’t think we have a vision of the type of album we’d like to make. Our band has certain parameters in that there are only 2 members, but beyond that we feel like anything we write together is “Blood Red Shoes”. We’ve been experimenting with piano and keyboard parts recently and writing instrumentals that definitely sit in more of a post-rock kind of universe. I have no idea how these sort of forays will impact on our next record but I feel like we have a lot of other music in us apart from our obvious punk rock side. That being said we’d never feel right making an album full of slow stuff, we’d get bored.

b3sci: Being from Brighton, England, what’s your take on musical regionalism (i.e. bands specifically not from London, NY, LA, major music hubs…)? Do you think it has helped Blood Red Shoes, or has it been an obstacle?

BRS: Well it’s a bit of a myth to start from because most musicians grow up in little shit towns and make their pilgrimage to a bigger town to pursue music. Iggy Pop is from Ann Arbor in Michigan you know? So yeah the focus on those major cities is only founded on the fact that generations of musicians keep moving there. I think Brighton does have a scene and there’s a bit of focus on that, but it’s nothing like if we came from NYC or London where there’s more of a perceived “sound” at a given time. So it’s given us that little bit more freedom to define our identity, that’s for sure.

b3sci: Unlike in the generations of Iggy Pop, today, bands all over the world have the internet. What role do you feel the internet has played in giving exposure to Blood Red Shoes?

BRS: A fucking huge role. We’re in the middle of a US tour and the only reason there are people even showing up is 99% because of the internet. We have zero background here so that’s the only real explanation. The internet has enabled bands with a DIY ethos to get even further than before because they can bypass the industry channels far faster, more easily and more cheaply than ever before and that’s a great thing. In the 80s or 90s those punk bands who got through like Fugazi are legends because they had to set up their whole record and touring network using phones and snail mail, and the fact is, there are a lot of great musicians who just don’t have the fucking organizational skills to do that! The internet has made that much more accessible. On the flipside of course, that means there are ten million more half-arsed bands to wade through.

b3sci: Being an established UK act, and from your experience, what are your general observations about this sort of reception of emerging artists from the UK in the states, and the same vice-versa?

BRS: Well so far, as our first time in the states, it’s been much easier and more welcoming than our first few tours of the UK. I think that does have something to do with us being established across europe first of course, but still, there’s a noticeable difference. I think there’s certainly a similar reception when US bands come over the UK, they’re seen as a bit more exotic and cool because they’re from the US! There are bands in england that are amazing and play to very few people and I find myself thinking, man, if they were from the US, they’d be playing to 5 times the crowd each night…

b3sci: “Box of Secrets” was a B-side on the “It’s Getting Boring by the Sea” single, and is also the name of your debut LP. This leads us to believe that BRS have a special take on what b-side’s should mean to an artist’s catalogue?

BRS: Well unless we’re totally fucked for time because we’re touring loads, our policy is that b-sides should be worthwhile songs, not just some crap you put out to pad out a single release. We’ve filled up releases with demo versions and remixes and we regret that, we were pushed into it by a label we now don’t work with, thank god. If we’re really screwed for time and we need a b-side, we’ll do our best to record something new – it might be a bit rushed or a bit half-formed but that’s at least better than a shit remix or a live version. One example was a song called “Carry Knots” which we wrote and recorded in 1 day off in the middle of tour and I really really like it. B-sides are part of your output and if you have standards, you need to keep them up there. Especially since EVERYTHING will be on Spotify now as well….

b3sci: How do you feel having “It’s Getting Boring by the Sea” synched in the movie Scott Pilgrim vs. The World has (if at all) impacted Blood Red Shoes… especially it being a single from your previous album?

BRS: Well it’s lead to a bunch of new people finding our band in the UK and US for sure. We were a bit worried it was such an old song, and that maybe people would be confused when they hear newer material like “Colours Fade”, but so far nobody’s commented negatively so that’s cool. It’s nice that it was an english director too, I mean, we’re no nationalists but I thought it was cool that he picked a british band on there amongst the other more established US acts.

b3sci: What would you guys like to see music licensing mean to popular culture and emerging artists in the years to come?

BRS: I think there’s a danger that the licensing stuff is becoming THE way to break a band – The XX are massive largely because of it and i’m very suspicious of that because it encourages bands just to write music FOR adverts or TV shows, and encourages them to put themselves in any context just for the exposure. You have to be careful with that because the context really affects the meaning of your art. I don’t want our band to be the one people know from a car advert because that’s not what we’re about at all.

b3sci: You’ve been playing together for a long time. To you, what are the main advantages and disadvantages of working as a duo both live and in the studio?

BRS: Well the chemisty and ability to lock in with each other musically is much more straightforward, it’s two people looking each other in the eye following where the music takes you. That’s a massive advantage. But yeah we also get really sick of each other on tour and fight more than average I think, just because humans who spend that much time together end up like that. A married couple would at least spend their days at separate jobs…we spend all day and all night together ha ha.

b3sci: What in your eyes are some of the popular misnomers about bands and the music industry among the general, casual listening public?

BRS: For a while people seemed to have the impression in England that we were an “Indie” band which we’re certainly not. In England, Indie means The Smiths, The Libertines, Franz Ferdinand…it’s basically lightweight guitar pop. We’re a rock band…for us the guitar riffs come first. I hope we’ve got past that with this album at least. The other thing is that people assume a 2 piece will be a minimalist thing, and that’s never been our intention at all, we want to sound as big as possible. Raw, yes, direct, yes, but not simplistic and minimal.

b3sci: Which song off of Fire Like This are you most proud of? Is there one you’d like to get back in the studio and rework?

BRS: You have to draw a line once you’ve recorded it. I’m sure there are elements in every song that we’d go back and tweak infinitely but the way to use those concerns is to channel them into the next record. Finding the flaws in your previous album is the best way to give you clarity about what to do on the next one.

b3sci: Which contemporary musician outside of the rock spectrum would you most like to collaborate with?

BRS: I’d love to work with Kieran Hebden (Four Tet) if that counts as far enough from the “rock spectrum”. Or someone totally pop just to explore that it’s like to try writing a song that half the planet can get into, that world fascinates me.

b3sci: If you weren’t in a band today, what sort of work could you see yourselves doing?

BRS: I kid myself that I’d try being a chef. But really, I’d just work for bands as a roadie so I could get as close to being a band as possible… 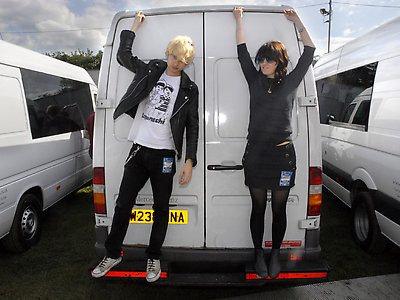