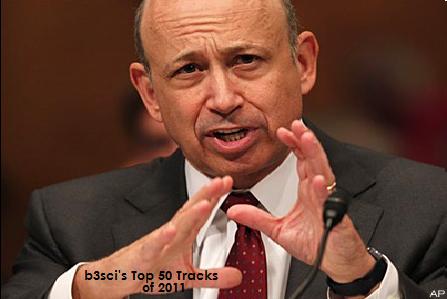 2011. What wasn’t to love? The rise of weirdo R&B, the fall of chillwave, the end of R.E.M. We started the construction of this list over a month ago. One truly epic and extensive Google spreadsheet later, we arrived at this Top 50. We sorted and sorted and sorted, listened through a TON OF STUFF, “traded jabs” on whether James Blake or Jamie Woon put on the tougher persona, etc. Thanks for reading and we hope y’all enjoy the list! 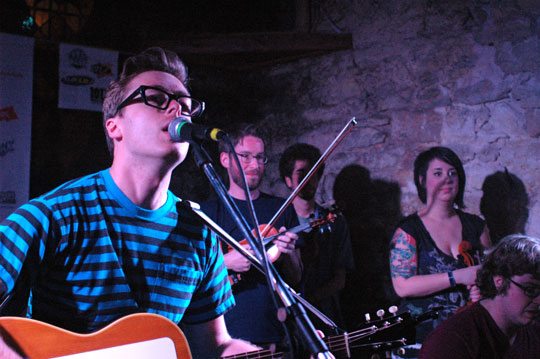 Jeremy Messersmith was a treat. “Tatooine” is a gem that made our top 50 list last year and we couldn’t wait to have the experience live. Pleasantly surprised. Jeremy’s set proved more quirky than expected. Concluding with “Violets”, his band helped carry a sound reminiscent of The Turtles and other late 60’s West Coast bands. Messersmith has talent and just seems to radiate longevity. 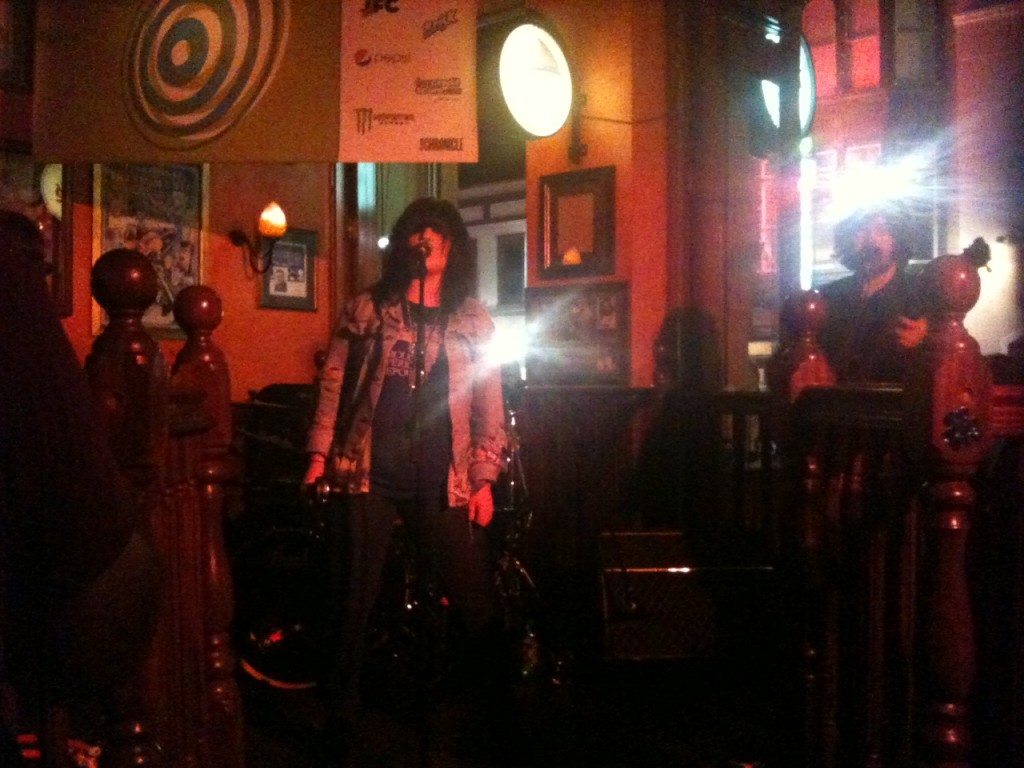 One of the best things about SXSW is that you can just walk down a street and your ears can bring you to something you’ve never heard before. In preparing some post-festival coverage, I recalled one of those bands that drew me in. If you’re a fan of Noel Gallagher (like we are) and his guitar playing (guilty again), you won’t be able to resist listening to Sweet Jane. Lydia Des Dolles lead vocals add a fresh compliment to a fantastic British sound. Into it. 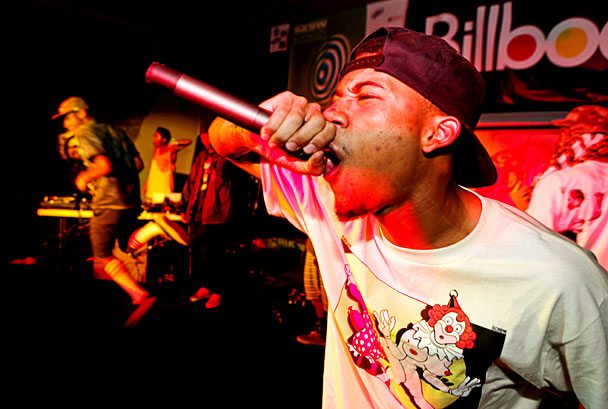 The line was around the block on E 6th street during peak freak hour Saturday night. Passing through three layers of security was necessary to enter Billboard Bungalow (patdowns included) I felt like I was going upstairs to see Obama. Black Milk is a pro. His killer on stage presence gets the crowd moving and into it. This man loves to perform. The live band was an….interesting touch. The sound was cool, the band was unique but somehow came off a bit flat, amateurish. The drums were set up in an odd, “less than traditional way”. The keys didn’t seem to be working. The bass was lose. It felt pretty backyard. “Dead Medley” was a highlight. Black Milk, the MC (minus his band), proved worthy of a long performance career, Common-style 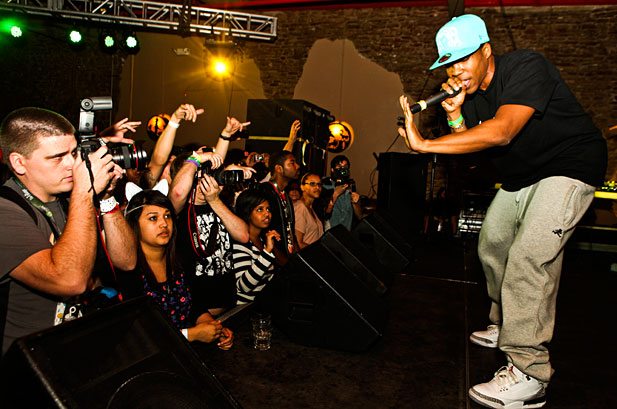 Curren$y enters late and totally high. He’s completely non-chalant as he commands the stage. Basically the opposite of what we just saw from Black Milk. The stage show went something as follows: he first came out, then a second MC joined him, then like four 19 year old looking dudes came up on stage to stand behind him, and they were stoned. As is Spitta’s M.O., the raps were smooth and the track were short. His rambles between tracks were actually pretty tight. As he did a solid job hyping the crowd between songs. 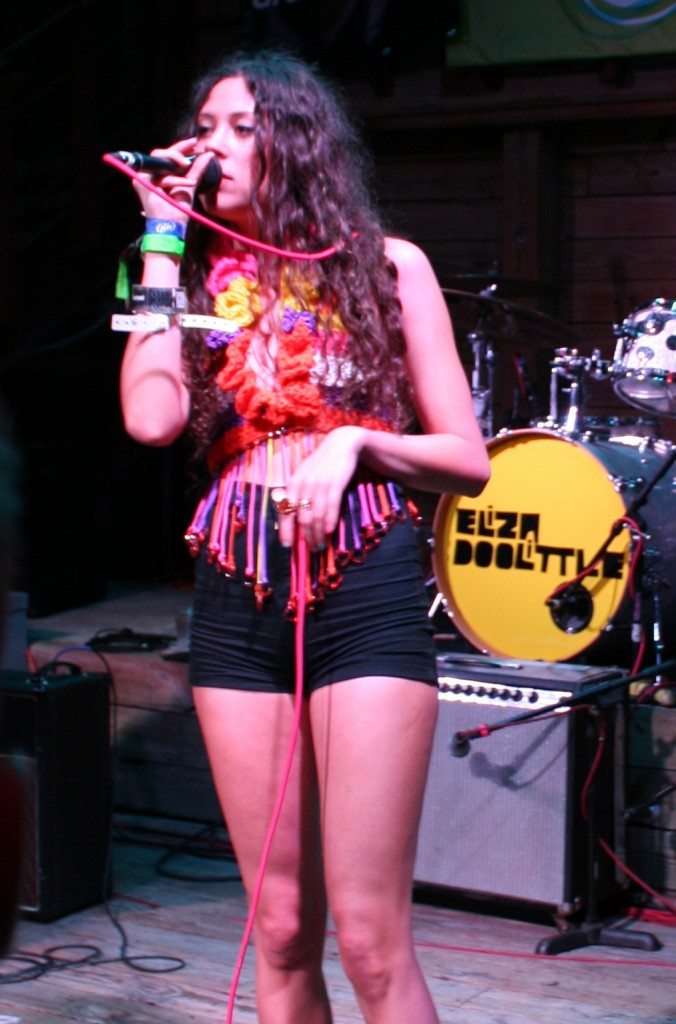 Earlier in the day, deep in the underbelly of Austin, we crossed paths with our girl Eliza Doolittle. One look at the b3sci posse, and at least one member of our crew got prob the hottest demand of the weekend, “Take off Your Skinny Jeans! You!” We were caught. Eliza had us. Of course, what to do when an adorable British girls calls at you to remove yer trousers, well never tell. But we did make it back over to Cedar Street, pants and all, to catch Eliza’s Saturday night set. We’ll drop this in again, just once more, to be, you know, official about it. Eliza Doolittle is adorable. And that sort of defined her set. “Money Box” was sunshine-y, feel good, glad in all the right places. Part of Eliza’s charm is her ability to connect. She could be looking into the audience at a 90 degree angle to you, or at her band, or up into space, and still all the while, you feel like she’s singing to you and only you. “I want to go back to a time when I was young. No not when I was 16 or something like that. No, I’m talking really young. I want to go back to when I was three.” And you stand there, as she smiles at you delivering that line, and you’re like, “Yeah, Eliza, that sounds like a pretty nice idea.”

Eliza’s secret weapon is her band. Her bassist, playing a stand up double bass, was ridiculously good. Her drummer, likely more at home in a different genre of music, was ace. The energy in the rhythm section, pitch perfect harmonies, and wisely placed guitar/uke make for a great stripped down feel good vibe. Eliza’s songs are uptempo, kinetic and they move with her. Where does an artist like Eliza go from here? How will she manage in the states? Can she be as big as Adele.. Lily Allen, Kate Nash? Take note.

If you love what made Grunge great, big guitar sound, rock and roll attitude. In the year 2K11, Ty Segall is about as close you can get. The packed house for Ty was brimming with all sorts of arrogant attitude. Like it came with admission. Segall and his youthful angst-driven bandmates delivered their sound heavy and intense, reminiscent of live Nirvana. Ty Seagall is prob a bit of an acquired taste, an acquired taste we just so happen to love. Long live the 90’s.

Ty Segall – Standing at the Station

Just when I thought I’d had enough; so many bands, so much music, so much that it started become noise; I still trudged back to the Cedar Street Courtyard, I had one last band to see, east Los Angeles act Funeral Party. The Steve Madden/Grooveshark Party had nearly emptied out. The few sticking around were mainly press congregated near the front of the stage with large cameras. The band brought with them to the stage a lot of energy, maybe the most energy- packed performance I’d seen all SXSW. A guitarist flying there, a bassist there. The guitarist’s acrobatics at one point caused him to trip, causing frontman Chad to wisely state ” Steve Madden shoes look great, but they still need a few days to break in.” This was the sort of band Victory Records should have signed 5 years ago, Funeral Party have a great new alternative sound, with great songs and great arrangements. The band’s live chops were obvious and when lead vocalist Chad Elliott is in key they are borderline unstoppable. During the breakdown of “NYC Sound Goes To LA…” a lyrical cameo from “Champagne Supernova” found it’s place “how many special people change, how many lives were living strange”. Where were you while we were getting high? This guys are that kind of band. Camera flashes were plenty and the venue had nearly filled back up by end of set. Funeral Party definitely helped wrap SXSW on a high. Take notes, rock and rollers, this band plays like they have nothing to prove, it’s real. They don’t give a fuck about what else is happening in indie rock or alternative music or anything like that, and really, why should they? 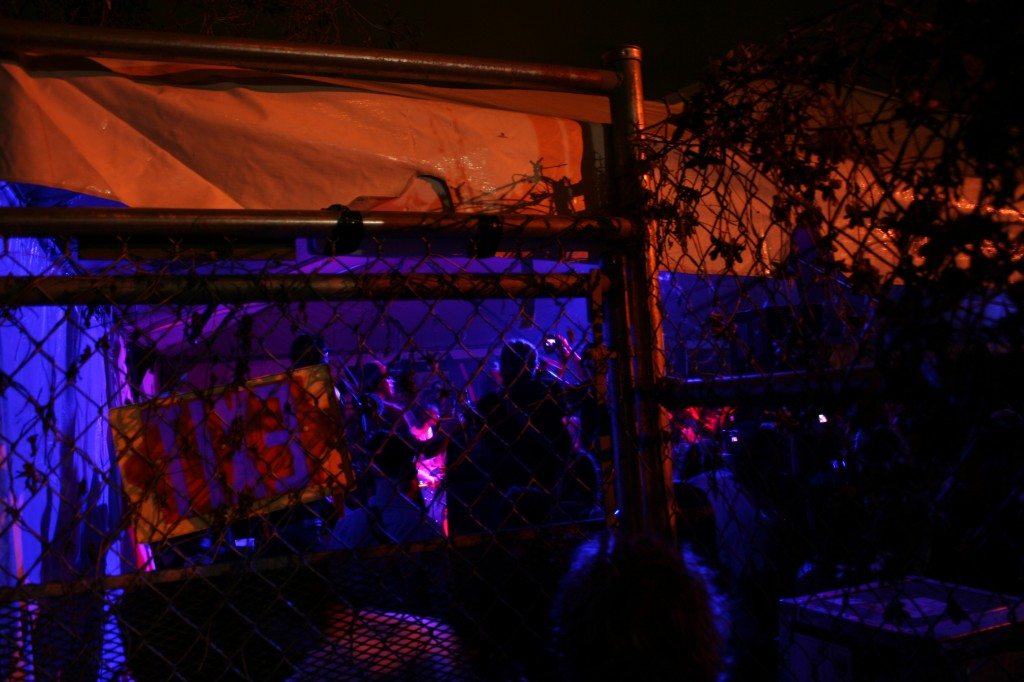 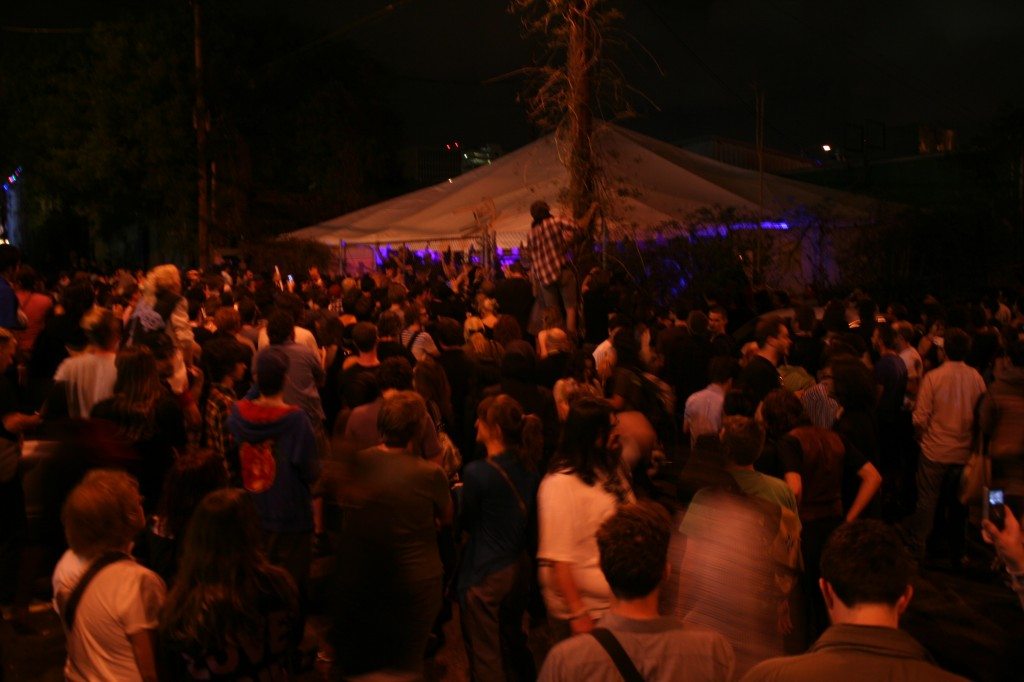 Your Miranda Rights are all that you got. Pretty much. As you’ve likely heard by now there was a riot at Death From Above’s reunion gig @ Beauty Bar. Being there in that moment. There’s a feeling, a certain sensation at your insides (not that $7 burrito we grabbed on the street on the way over) that experience when you were among a crowd that’s beginning to lose control. And there, there’s a feeling like anything can happen. The next bit of your life, those events, are not quite in your control anymore. The show, itself, was terribly handled by the venue. The location of the line was not clear, where the line started and ended was not clear, whether anyone was actually getting in was not clear. A definite vacuum of information existed. (Riot criteria 1). What is Beauty Bar? Beauty Bar is a venue that maybe holds 200 people. It’s essentially a piece of a larger asphalt lot with a tent on top of it. “In line” or probably more appropriately mobbed about there venue there were maybe 600-800 people “on the outside”. A large throng of people in a tight space (Riot criteria 2).

The band starts. Immediately, (and obviously any chance of getting in the venue dashed) the crowd turns violent. Beers fly, stones, garbage they fly too. Someone throws a chair. The chainlink fence that divdes the outside from the inside is under siege. The kids are intent in bringing it down. They shake, they climb, they kick. The fence lasts maybe 10 minutes. It’s down. By this time the venue has circled several bouncers to where the fence once stood. They’re holding the crowd back now. They’re the final bit of defense between the current situation and total mayhem (the latter quickly becoming more and more the former). Then suddenly, the fence is boosted back up. The kids are trying to help. They’re trying to keep some bit of order. The overall crowd, though, grows angrier. The fence is almost now in a state of volley. Bouncers to Crowd. Crowd to Bouncers. Mace sprays from the venue. The mob is pushed back. Time for us to check the fuck out with mounted riot police, arrests, and all that reality TV stuff pending. It was certainly one hell of moment.

Death From Above 1979 – Romantic Rights 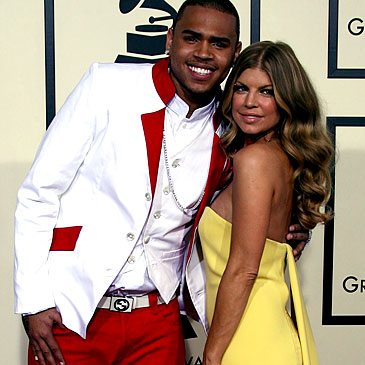 Heard this fresh Chris Brown remix on this week’s Gilles Peterson show (of all places). This Patchwork Pirates Re-Edit may not be the “Perfect Beat” but it’s pretty damn close. 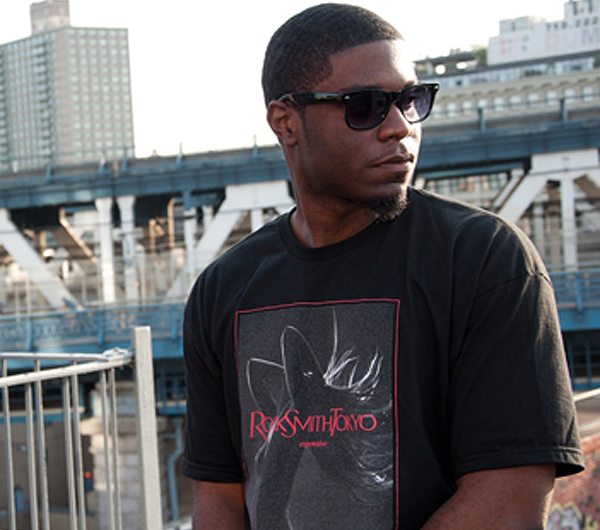 Can’t front, I’ve had this on repeat literally all day. Maybe played it twenty times by now. The original “Hometown Hero” is great, the beat which features a sample Adele’s “Hometown Glory” on the hook is really killer but live with a live band/vocal (SF’s Grillade) on top it just takes the song to this just really powerful place. I mean, you really feel the song’s sentiment, it’s very very immediate. The guitar, K.R.I.T.’s flow, the vocal quality, it all draws you in, pulls at you to the studio where this session was cut, to the place where K.R.I.T. first put pen to the song’s rhymes, to your own home, your place of birth. All of that once. It’s amazing. 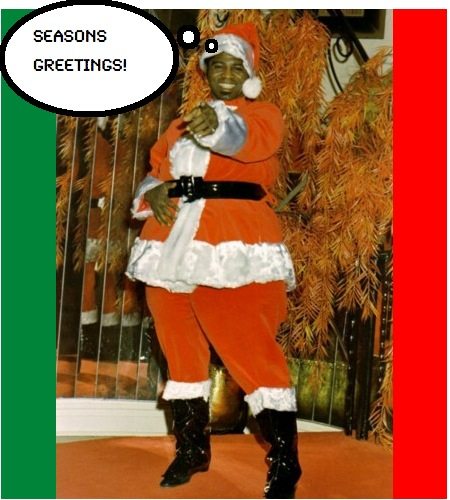 Compiling a year end Best of Songs list is not exactly the easiest ask. There are SO MANY great songs. And ‘the line’ between making one’s list a true Best of list vs. a Favorite songs of the year list can be quite the thin one. Here’s our best go at it. Also, if you’ve yet to check out our Top 50 Albums of 2010 list then you can get familiar HERE. Happy Holidays, and thanks for reading! We’ll see y’all in 2011… 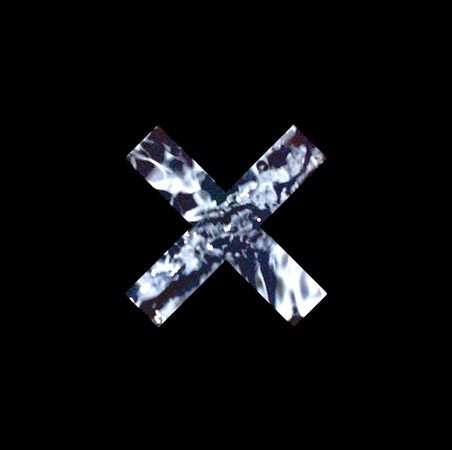 The x man continues his Worldbeating tour of nonstop jams on this flip of the Rui Da Silva track “Touch Me”. A track that minus the semi-dated turn of the century production values could be, in a parallel world of (Imagine!) The xx 10 years ago, an xx track itself. Expect a sonorous blend of caviar percussion tones and champagne synth voicings in the mix. A tip of our tumblers to the ham and eggers over at mymatestretchy on the track.